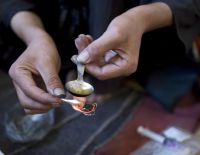 Heroin is an illegal drug that is extremely addictive. This drug is the most abused opiate in the world and it is also the fastest acting. Heroin is created from morphine. The drug morphine is a naturally occurring substance which is extracted from certain varieties of the poppy plant seed pods.

What is heroin and what does it look like?

The color of heroin ranges from a white to brown powder. There is also a form of the drug known as Black Tar Heroin. This type of heroin is black and sticky in nature. The color of heroin is often determined by what it is cut with. Dealers often cut or dilute their product to increase their profits. Other substances that heroin is cut with include: sugar, starch, powdered milk, or quinine. Heroin purchased on the street may also be cut with strychnine or other poisons. Due to this fact, heroin users never know the true purity of the drug they are taking. This increases their risk of overdose and death.

What is heroin and how do people use it?

Users of the drug inject, smoke, or snort it.  Additionally, because some users inject the drug, they run the risk of contracting HIV or other blood born diseases. This happens when a heroin users shares needles or other injection equipment with an infected individual. Often, addicts are unaware of their health problems and share their contaminated paraphernalia without being aware of the serious consequences.

What is heroin and who uses it?

A wide range of people use and abuse heroin. There is really no particular type of person who uses this drug. According to the DEA, approximately 1.2% of the population reported heroin use at least once in their lifetime.

What is heroin effect on the user?

When a person takes heroin, the initial feeling they experience is a rush or euphoria. The users mouth will become dry and they often begin to nod in and out of consciousness. Additionally, their arms and legs will begin to feel very heavy. Users will experience diminished mental capacity and dulled emotions. The effects of this drug typically last 3 to 4 hours from the time of the users last dose.

Users of heroin experience many negative health risks from taking the drug. The two primary risks are fatal overdose and contraction of HIV/AIDS. Long-term users of the drug experience health risks such as:

What is heroin addiction?

Heroin is one of the most addictive drugs in the world. Users of the drug build up a tolerance to its effects. A tolerance to heroin or any other drug means that the user must take more of the substance to achieve the same effect that a smaller amount did initially. Heroin is a drug that is both physically and psychologically addicting. Users experience extreme withdrawal symptoms if they discontinue taking the drug.

What is heroin withdrawal?