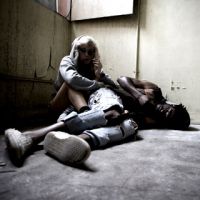 Heroin abuse overdose is one of the most serious health effects that an user may experience. Heroin depresses the part of the brain that controls breathing. In a heroin abuse overdose, breathing slows down and may stop completely. A person who has overdosed is unconscious and cannot be roused. Their skin is often cold, moist, and bluish. They experience disorientation and delirium, blue lips and fingernails, muscle spasms, discolored tongue and dry mouth, severe stomach cramps, and depending upon other drugs in their system, seizures. Heroin abuse overdose victims often pass out or slip into a coma or die without anyone even noticing. A heroin abuse overdose can be treated at a hospital emergency room with drugs, such as naloxone, which blocks heroin's depressant effects.

Depending on purity of the drug and the history of the user, a lethal dose of heroin may range from 200 to 500mg. Hardened addicts have survived doses of 1800mg and higher. However, with street heroin there is no absolutely certain "safe dosage." It depends on tolerance, amount taken, and purity of the heroin. Many illegal drugs are “cut” or diluted with other substances and heroin is no exception. Illegal drugs change hands several times before they are sold to the drug user and are often diluted to increase profits for dealers.

When someone uses heroin, they can never be sure how potent the drug is that they are taking into their body. Heroin is often mixed with sugar, starch, quinine, strychnine, or other poisons. These additives may induce other potential dangers. Because of the unknown strength and actual contents of the heroin they are taking, users are at a great risk of heroin abuse overdose and death. Making and selling illegal drugs is not a precise science. Often drugs from the same dealer and batch have varying strengths. The active ingredient is not necessarily evenly mixed in. Even experienced users can be caught by a different level of purity in a sample and accidentally suffer a heroin abuse overdose.

The risk of a heroin abuse overdose is increased by:

A heroin abuse overdose, even if not deadly, can have long-term physical and mental effects. Chronic pulmonary or heart complications may develop. If the brain is deprived of oxygen for any length of time, brain damage can occur. Liver disease and viruses or infection can take up permanent residence in the blood or organs. Other drugs in combination with heroin can also bring about long-term psychosis and create fundamental changes in brain function that are unalterable.